Production of Stella by Siobhan Nicholas

QR Codes at the Herschel

In June 2014 we added another eight languages to the QR codes displayed on our exhibits. These allow visitors to download a translation of the display labels and detailed descriptions of nearly every exhibit in the museum – now in ten languages:

It is unusual for a small museum to provide such a significant amount of interpretation to overseas visitors. We have achieved it thanks to a grant from the Arts Council of England and the innovativ​e services of QR Languages Ltd.

How it works: visitors use their own smartphone, linked up to the museum’s free wifi hotspot, to scan QR labels for each exhibit and read ​the​ description in their preferred language.

Tim Richardson from QR Languages says: “The Herschel Museum is proof that there is now an affordable way to provide a more enjoyable and meaningful visitor experience for the  ​ever-​increasing number of foreign visitors to Bath.”

The Famous pastel portrait of William Herschel by John Russel, RA c 1794 has been lent by the Herschel Museum to an important exhibition currently being held in Hanover, The Hanoverians on Britain’s Throne 1714-1837.  The exhibition celebrates the vibrant cultural exchange in the arts and sciences between Hanover and Britain.
http://www.royals-aus-hannover.de

This season Dr Jenner’s House and The Herschel Museum of Astronomy are embarking on a special relationship.  The museums are both homes to great scientists, arguably the two greatest and most influential men of science in the eighteenth century.  William Herschel is best known for his discovery of the planet Uranus and later of infrared light.  He also hugely improved the design and manufacturing techniques of telescopes.  Dr. Edward Jenner, a man of wide interests was the pioneer of smallpox vaccination, he researched into other areas of medicine particularly angina and was a keen student of fossils and geology. Both venues not only illustrate the life and work of the men, the houses are also excellent examples of Georgian homes and both were set up and are run by independent charitable trusts.  It made sense for the two museums to work together to promote an interest in, and understanding of, the work of Dr Edward Jenner and William Herschel. Visitors to the Herschel Museum of Astronomy will be offered two for one vouchers to Dr. Jenner’s House and vice versa. 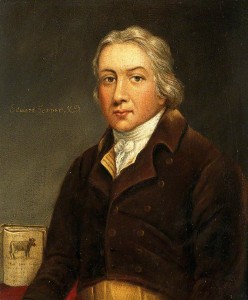 New Patron for the Herschel Museum of Astronomy 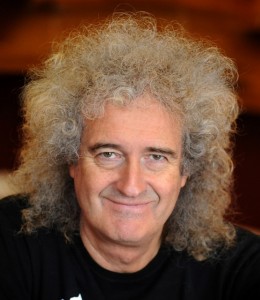 Dr Brian May CBE, Fellow of the Royal Astronomical Society has agreed to become the new Patron of the museum, stepping in to the role left vacant by the death of Patrick Moore in 2012.

The internationally acclaimed rock star, song writer, producer and animal rights campaigner, put his interest in astrophysics on hold as Queen became a global success.   Thirty years later he completed his PhD at Imperial College, London in 2007.  In 2006 he co-authored his first book, Bang! The Complete History of the Universe, with Sir Patrick Moore and Dr Chris Lintott. This illustrated astrophysics book, was followed in 2012 with the release of a greatly anticipated sequel, The Cosmic Tourist. Brian May was a friend and colleague of Sir Patrick Moore, the man he credited with igniting his love of astronomy.  He says, In common with everyone of my generation who took up astronomy as a hobby or as a profession, I was inspired as a boy, by Sir Patrick on ‘The Sky At Night’ – on the TV just at the time I was supposed to go to bed !  The inspiration lasted my whole life. Sir Patrick had a longstanding involvement with the Herschel Museum of Astronomy, as a great educator and enthusiast he supported the museum and helped raise its profile.  The staff were all agreed that there was only one possible replacement for Sir Patrick and wrote to Brian May inviting him to be the Patron of the museum. We are thrilled and delighted to welcome Brian May as our new Patron, says Curator Debbie James. His knowledge of astrophysics and gift for inspiring enthusiasm for astronomy in others make him the perfect ambassador for the museum. William Herschel came to England as a professional musician and then fell in love with astronomy, Brian May continues the link between music and the stars.  We couldn’t think of anyone better suited for the role. Brian May accepted the invitation. I’m honoured to follow in the footsteps of Sir Patrick, as Patron of the Herschel Museum. Patrick had a great affection for the museum, and I think he felt an affinity for Herschel himself, a man who, like Sir Patrick, devoted his whole life to science. It’s an inspiring place, giving a first-hand glimpse into the life of one of the world’s finest astronomers, and a reminder that the dedication of one man can change the perception of the whole world.  I hope to be a good patron, and an ambassador  for this important part of Britain’s scientific heritage.

New Acquisitions at the Herschel Museum of Astronomy

The Herschel Museum recently acquired a superb example of a Butterfield sundial for the collection dating to c. 1690.  Thomas Butterfield was an English clockmaker working in Paris during the latter part of the 17th – early 18th century.  His sundials were so beautifully crafted and sought after that the style was frequently copied by other makers and the term ‘Butterfield’ became synonymous with these small objects.   Like other Butterfields the gnomon is in  the shape of a bird.  On the reverse of the sundial are the names of European cities and their latitudes, it bears no no hallmark as English silver was not marked at this early date.  The sundial was purchased with grant aid from the Mercers’ Company. 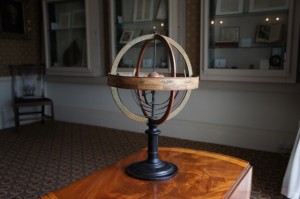 The Herschel Museum has also recently acquired a Copernican Armillary Sphere from the workshop of the renowned Parisian map and globe maker George Delamarche.  It was purchased with the aid of a grant from the PRISM fund. Uranus and Herschel’s name are both visible on one of the outer rings. The sphere is made of brass wood and paper.

The Herschel Museum Goes International The Herschel Museum of Astronomy  is working with QR Languages to provide a new system of interpretation throughout the museum.  This will eventually offer information about the exhibits in a variety of languages and a special tour of the museum geared for younger visitors.  Initially, in view of the ever increasing number of Chinese tourists we have a Simplified Chinese tour as their first step towards making the museum accessible for international visitors and put us firmly on the map for increasing numbers of tourists.

Caroline Herschel Nominated for Bank Notes In the Independent on July 25th we were thrilled to read that Geoff Wilson of Fitch Design Agency had flagged up Caroline Herschel as an ideal candidate to grace our banknotes.  He sites her as an excellent role model for girls, an example of an immigrant made  good and an excellent scientist in her own right.  Follow the link below to read the piece and you can  ‘like’ this on our facebook page.

The new Mayor of Bath, Malcolm Lees and Mr Don Foster MP for Bath were amongst the local people who came to celebrate the unveiling of some very special sculptures at the Bath Riverside on June 7th.

Sculptor Patrick Haines has been working closely with the Herschel Museum of Astronomy on a work entitled The Comet Sweepers. It features two Chippendale-style chairs cleverly fashioned  in different coloured bronzes with a telescope and books.  The work on a terrace overlooking the River Avon is a tribute to the astronomers William and Caroline Herschel.

The Comet Sweepers was commissioned by Crest Nicolson who are developing the Riverside site. 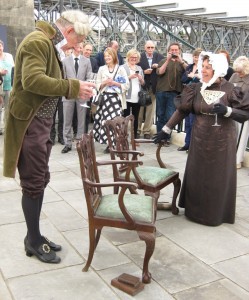 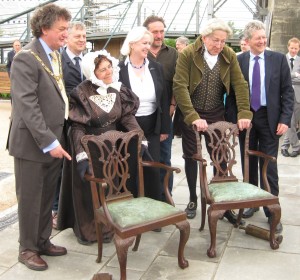