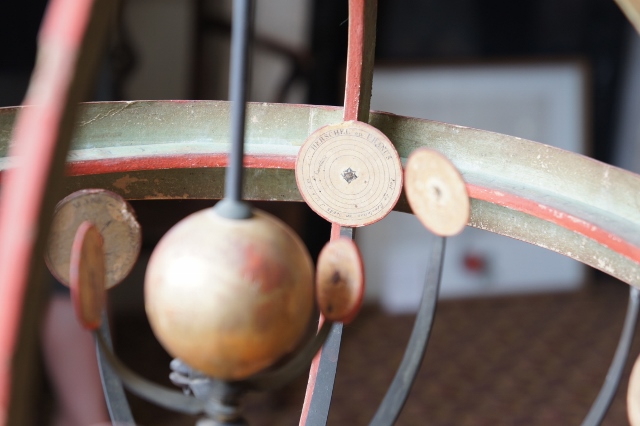 Among some of the most interesting astronomical instruments on display are the collection of celestial and terrestrial globes, and a rare example of a lunar globe by John Russell R A, who was a friend of William Herschel.

The lunar globe in the drawing room was made in 1797 after Russell had observed the Moon through one of Herschel’s telescopes and it captures the details of the craters seas and mountains which are carefully named and described.  The reverse side of the globe is of course blank as it was not until the Russian space missions of the 1960s that the far side of the Moon was photographed for the first time.

There are also a number of celestial globes in the museum including a miniature pocket globe which is one of a pair with a terrestrial partner by Senex, a cartographer working in the latter part of the  18th century.  These charming objects may well have been used in teaching or as demonstration models by astronomers such as William Herschel; their practical use was limited however, as they show a strange reverse view of the heavens dotted with constellations.  The celestial globe on display in the music room, is unusual because it shows a constellation ‘telescopium  herschelliana’ named after William Herschel following his discovery of Uranus in 1781 and is in the shape of a telescope. The earliest surviving globes date to the 16th century.

We also have two armillary spheres on display at the Museum.  Both are Copernican as opposed to Ptolemic spheres, because prior to Copernicus’s discovery that the planets of the solar system rotated around the Sun, it was assumed that they revolved around the Earth – a theory evolved by the mathematician Ptolemy in Ancient times.  The brass sphere was made in Italy towards the end of the 18th century and it is a 3 dimensional model of celestial objects which represents what early astronomers thought the heavens looked like, with brass rings showing the Tropic of Cancer and the Arctic and Antarctic circles.

The larger armillary sphere on display in the music room, is supported on a stand and is fabricated in wood and papier maché.  It was made by Delamarche a Parisian cartographer, in 1810 and its main point of interest is that Uranus appears on one the inner face of one of the rings, with the name Herschel inscribed upon it. Armillary spheres are known from Ancient times and are believed to have been principally used for navigational purposes.

Also of interest is the early 19th century tellarium in the drawing room; it is by a maker called Bentaux and it is a moving model which shows the rotation of the Moon and Earth, and can replicate eclipses and other astronomical phenomena.

On display in the exhibition gallery is another eccentric object called a Cometarium.  Cometaria were essentially automata designed to show the elliptical orbit of a comet around the Solar System.  This example dates to a period of comet mania, in the early 19th century, following the appearance of the Great Comet of 1811.